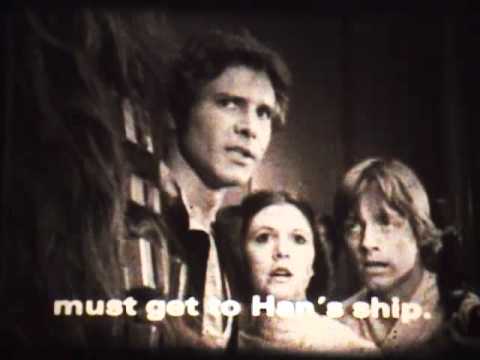 The shortest of all the truncations, this version by Kenner Films was released shortly after the film was in theaters, in late 1977. Peter Cushing is credited, though he does not appear in the film, as is the music of John Williams, though this is a silent film.

It consists of two scenes: Ben and Luke discussing Anakin Skywalker, and the escape from the Death Star, where the Millennium Falcon battles the TIE Fighters.

Let us consider the story presented, as though we knew nothing about Star Wars, as if this were the only version of the tale we had: the mysterious old man, Ben, gives the young man, Luke, his father’s light saber, and tells him about his father, the Jedi Knight. The young man turns it on, and waves the magical blade about for a long time, marveling at the glow. Ben then explains the true story of Luke’s father’s death — he was betrayed and killed by another knight, Darth Vader. Ben’s expression is one of sadness and regret. Ben then explains the force, a mysterious energy field that binds the world together, as Luke looks on bewildered, trying to understand. There are robots present, even though nothing else about the setting suggests that this is a science fiction story, and Luke is fixing one that looks like a human. The cylindrical one, R2D2, produces the image of a woman, Princess Leia, who begs Ben for assistance in saving the rebellion from the evil Empire. Ben and Luke look at one another for a long beat, and then Ben tells Luke that he must go save the Princess. Luke is apprehensive, doubtful, as he paces about, not wanting to met Ben’s gaze. Luke has responsibilities here, at his home, but he also feels a need to join the rebellion. The choice is literally out of Sartre’s Being and Nothingness.

We cut to a triangular ship, flying through space, as the subtitles finish “…and fulfill his destiny.” It is clear what Luke’s choice has been. Is this his ship? One he has smuggled himself upon?

The ship flies towards a large, metallic planet, with a huge crater in the side, like a baleful eye. Cut to a large, hairy man running down a corridor, followed by a roguish fellow in a vest with a rifle. Fighters for the rebellion, perhaps? They observe a group of soldiers in white armor guarding a space ship. Luke and Leia arrive moments later. We are inside the Death Star, and Leia has been rescued. Han Solo and Chewbacca, the other two, had aided Luke in the quest Ben sent him on. The soldiers move on, perhaps because they are changing shift, and our heroes see their chance. R2D2 and the robot Luke was repairing make their way towards Han’s ship as well. But they have moved too quickly, and the soldiers turn to fire on them. A gun battle ensues, and, if we look closely, a helmeted figure in a dark cloak, wielding a sword similar to that which Ben gave Luke, is seen walking away in the background. Is this the Darth Vader that Ben spoke of? Is that why Luke fires in such anger and distress, staying far longer than his companions to kill the soldiers? But a metallic door slides shut, protecting the dark man from Luke’s shots, even though he kills two of the soldiers, and Luke retreats to the safety of Han’s ship.

Han and Chewbacca pilot their ship away from the Death Star, while Luke sits forlorn. Leia attempts to comfort him, as the robots look on helplessly. Was this the only chance Luke had to avenge his father’s death? But there is no time for such thing — Han’s ship is being pursued by Imperial ships, and they must man the turrets and defend themselves. An exciting space battle ensues, with the small Imperial Ships flying about as Luke and Han (or is it Chewbacca? Their names aren’t distinguished) fire away. R2D2 puts out a fire inside. Luke’s spirits rise as the fight goes on. Ship after ship is destroyed, until our heroes are safe… for now! The End.

I’m certain that most of you have noticed that there are many very important things absent from the story: the Death Star Plans, Obi-Wan’s Death, the Destruction of the Death Star, the Death of Luke’s aunt and uncle… And yet, for all that, it does tell a more or less complete story, with an emotional arc for Luke. It also brings up one of the important questions that we will be asking ourselves throughout this discussion:

Is Star Wars about rescuing a princess, or about delivering secret plans?

In this version, they obviously chose the former, which leads to some strange choices. The scene with Ben and Luke is one of the most dialogue heavy in the entire series, and thus is an odd one to pick for a silent adaptation. The rescue of the princess occurs off screen, as a lacunae to be filled in by the viewer. It demands questions and invites further stories to be written about it. And yet, for all that, cutting the story down to just those base elements is to be admired. It was surely no easy task to turn the entire film into a comprehensible story, rather than a sort of Tumblr-esque “greatest hits” gif repository. It is fascinating to see how much of a story can disappear without affecting the other parts. We already know about the subplot of Biggs Darklighter that was excised from the original film, leaving only some incongruous dialogue in the Death Star trench battle to suggest that Luke is fighting alongside his best friend and someone’s he never thought he’d see again. How much more of the movie could be removed? What is the point of Star Wars? How much can we lose without it becoming a different story?

This version was, of course, intended for those who had already seen the film in theaters, and knew the answers to these questions. The visual designs of Chewbacca and Death Vader, the choice to display as many of the starship models as they could, spending as long as they can with light sabres and 3d messages projected on tables — it is clear that despite the black and white silence, they still want to convey the spectacle and effects wizardly that made the movie so memorable. Were our ur-text lost, this version would be an odd one to try and recover the full version from. It could lead to conflicts over the nature of the Force, the identity of Darth Vader, what, precisely, the Death Star is… But the tantalizing hints provided are nonetheless appealing.

Would it endure? Who can say. Could it endure? Certainly. It begs for expansion. It demands filling in. Though it says The End, this is not an ending.